Scopello, the charm of an ancient village and its Tonnara

Just before reaching lSouth Entrance to the Zingaro Nature Reserve we find ourselves traversing a stretch of the northwestern coast of the Sicily, among the most spectacular in the world.
We are just 10 kilometers from Castellammare del Golfo and 10 minutes drive from the Reserve.

The village of Scopello

The small seventeenth-century village of Scopello suddenly appears and gives us a spectacular view of the famous stacks now become the symbol of this corner of paradise.
A nature with strong colors and evocative scents envelops the entire territory while the sea, of an intense blue, is its ideal setting.

The village is built around a beautiful beam of the '600 and an ancient watering hole. Here, in summer, there is a concentration of tourism that loves getting lost in the slow rhythm of the village, between its perfumes and its narrow and panoramic alleys. Also mandatory for good food, its famous "pane cunzato"!
Forget the rush, here time takes another rhythm, slow and velvety ... another dimension.
But it does not change only the rhythm, it changes the way of approaching things, Scopello conquers with its simplicity and its authenticity.

Going down the coast you arrive in a few minutes to the ancient Tonnara Scopello, here the Faraglioni are a truly breathtaking presence, beautiful giants lined with prickly pears that stand out against a cobalt blue sea.

The tuna dates back to the 13th century , one of the oldest in Sicily, its enormous value, both architectural and cultural. Its spacious and well-recovered environments tell a glorious past, of lucky mattanze, of traditions never forgotten, of men respectful of the environment. In addition to the tower of the tonnara you can also see a watch tower erected during the Bourbon domination, the latter is part of a system of defense towers of which Sicily has its coastline.

This corner of Sicily, beautiful and wild has become famous all over the world, thanks to films and commercials that have been able to show their soul. Nature, absolute master.

Do not neglect even the hypothesis of admiring this place from the sea, every day from Castellammare del Golfo or from San Vito Lo Capo depart different Boat tours for the Zingaro Nature Reserve and of course you can not miss a stop in the enchanting waters of the Tonnara for a memorable dive. A fantastic experience. 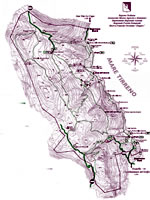